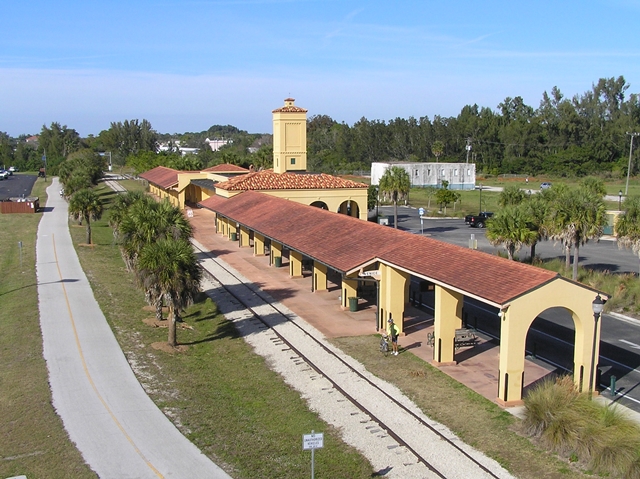 The beautifully located Historic Venice Train Depot is the starting point of the Legacy Trail to Sarasota. The adjacent park with benches and a playground is a popular destination for families.

A little excursion into history of the Train Depot

In 1911 the railroad to Venice was completed and the way was paved for the development of the region. Bertha Honore Palmer (Mrs. Potter Palmer), a businesswoman from Chicago, purchased 60,000 acres. The Sarasota-Venice Company, which she managed, planted a small area south of Roberts Bay as “Venice” and offered plots for purchase.

The railroad tracks were extended to the newly levelled area and the new railroad station, completed in 1927, was named “Venice Train Station”. Later, the post office was also moved there to be closer to the station.

Historically and architecturally, the building is unique. It was designed as a racially segregated building, i.e. there were 2 waiting rooms. The building was built in the then very popular style of the “Mediterranean Revival”, a design style that was introduced in the United States in the 19th century, incorporating various references from the Spanish Renaissance, Spanish colonial period, Beaux-Arts, Italian Renaissance, Andalusian architecture and Venetian Gothic.

When the Venice Train Depot opened on March 27, 1927, it heralded as the finest station on the Seaboard Air Line Railway. During the Second World War, trains provided personnel, vehicles, building materials and supplies to service the Army’s air base in Venice. From 1960 to 1991, the famous Ringling Bros. & Barnum and Bailey Circus made its winter home in Venice. The circus arrived by train and weeks later went to circus performances all over the country.

In 1971 the last passenger train was running. In 1975, the station building was closed, with freight trains still coming into the city until 1997.

Renovation of the Train Depot

Sarasota County purchased the aging depot and undertook a thorough renovation. Today the Venice Train Depot is a great example of early Venice architecture. During the renovation, the grounds were expanded to the south. This area now serves as the hub for the Sarasota County Area Transit (SCAT) bus system.

From our vacation home, Villa Happy Gator, it is only a few minutes’ drive to the Historic Train Depot. A nice alternative is to take a bike through the small streets of South Venice and then along the Venetian Waterway.

Events will be announced on the Historic Venice Train Depot Facebook page.

Welcome to our newly built modern pool villa with 3 bedrooms, 2 bathrooms, 1100sf pool deck with lounge area, sunny South-Western exposure, beautiful beaches nearby – only 10 minutes to our favorite beach "Manasota Beach". Bikes for exploring the fantastic bike trails of Venice and Sarasota County are inclusive as well as High Speed internet, WiFi and a phone for free nationwide calls.